Why Working the “Core” is a Sales Pitch 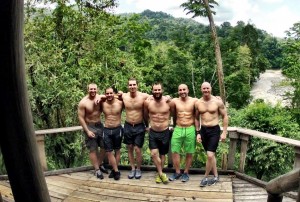 You here it from trainers, coaches, PT’s, doctors etc…”I am going to give you some “core” exercises or you need to work your core.” Just before having my spine surgery the doctor told me I needed to work my “core” to support my back. I had a 450 lbs one rep max deadlift and could stabilize my midline with no problem with high rep deadlifts at 300+lbs., so I don’t think my “core” was the problem. We now know more than ever that doing crunches, sit-ups and other specific abdominal exercises using the abdominal muscles as a primary mover is junk science. Not only is it junk science, but it also can be damaging to the spine. Also, performing isolated abdominal exercises to lose body fat just doesn’t work. First of all, we need to understand what the trunk muscles actually do. For frame of reference, I term the abdominal wall and back musculature, the “trunk” muscles. Yes, it is true that the trunk muscles are the foundation of human movement and that movement needs to progress from the central axis to the periphery. But the idea that you should “train” the trunk muscles as an isolated group of muscles, with specific exercises to only target the area, is not consistent with the anatomical or daily use of these muscle groups.

The trunk muscles are made up of all of the muscles in your back, abdominal region and the sides of your rib cage.

To better understand the trunk, you have to understand it’s purpose. The purpose of the trunk region is to provide a firm foundation for the hips, arms, legs to move and create a tool for human leverage.

What purpose do the abdominal and back muscles serve? These muscles are the dynamic and contractile support of the trunk for movement of the extremities. They are “stabilizers” and are postural muscles that allow the big primary movers of the hips and arms to function. So, to train the back and abdominal muscles as primary movers, is contrary to their natural, innate function. Once you become vertical, stand up or sit from lying, your trunk muscles are “on” all the time. This happens due to the positioning or posture that you tell your body to assume. In other words, you don’t say, “body, flex the core, rotate at the hips and pull with the hip flexors….,” that’s a crazy isolated manner to think of movement. What happens is your brain says to your body, “sit up,” and in one compound movement, your body performs the task. Once in sitting or standing, the postural support is involuntary, meaning you don’t have to think about it. So, why would we train a muscle group that is mostly postural in an isolated manner? I don’t.

The trunk serves the following roles;

Provides a foundation for balance, coordination and general support

Acts a rigid lever and foundation for the extremities during movement

Can be used as a tool during lifting loads

Now that we understand the role of the trunk muscles, it changes the way we train them. Want to build a rock solid set of abs or back muscles? If you do, here’s how! Stop thinking about specific isolated exercises for the abdominal muscles and start thinking in context of these muscles as stabilizers during all human movement. Their primary contraction role is that of an isometric stabilizer. In other words, they contract and hold the trunk as a rigid column with the spine in neutral. So, here’s the secret.  Any compound movement training that requires the spine to be under load and stay in neutral works the “core.” It’s that simple. For example, while doing the squat, deadlift, press, push-ups or even pull-ups, keeping the abdominal wall and back tight throughout the reps/sets promotes trunk strength. The craze to work the “core” gives it some special label, when in reality if you weight train, maintain a tight midline and have a solid diet, you will build a trunk made of steel and have the abs to show for it.

Let’s think about some exercises that we use the trunk as a rigid lever; squats, deadlifts, good mornings, bent over rows, weighted carries, KB swings, press, bench press, strict pull-ups, push-ups, handstand push-ups, bent over rows, weighted lunges, sled push/pull, etc…. or anything that requires you to keep the spine rigid during the exercise. There are also a plethora of rehab exercises that can focus on lower level trunk training and stabilization.

The primary reason why I don’t recommend specific abdominal exercises, crunches, sit ups etc…is because you can build a strong trunk without doing it and it’s safer. If the mechanics are sound in the movements your training, and the spine is staying in neutral, your building the trunk!

Lastly, most people who workout have abs! You just can’t see them because of their diet. If you don’t get rid of that layer of fat, your abs just stay hidden, but that doesn’t mean you don’t have abs. I get it though, there are lots of people who workout hard and want to have the body to show for it. By the way, the guys in the picture used for this article don’t do isolated abdominal exercises, they lift and eat right. So, train hard, keep a tight midline, and eat right!