3 Ways You Can Trash Your Back!

I don’t normally blog about myself, but for this blog, I have to share with you something that has happened over the course of my athletic career and most recently the last three years. The experience that I have had is not too uncommon from other athletes who have suffered an injury. When I blog regarding a particular topic, I combine my experience, academic rigor and science to hopefully add value to your training, health and fitness. I believe that my background combined with my personal experience gives me a unique and relevant insight to help you avoid a back injury and improve performance.

I started as a gymnast when I was 12 years old. I competed as a club and school team gymnast until college and then competed for my freshman year in college as a gymnast. I was also a yell-leader (most people don’t know that) in high school for 2 years. So, I spent a lot of time bouncing around, upside down and absorbing the impact of gymnastic movements and training for the better of 8 years. The only major injury that I sustained during gymnastics was when I was in 9th grade. I was competing in a district meet and over rotated a floor exercise tumbling movement and severely sprained/strained my low back. I healed from it and moved on.

Then after my formal gymnastics years, you could find me showing off doing back flips, front flips, or strength moves whenever given the chance. Fast forward to 40 years old when I first read an article about CrossFit. Then I started crossFitting and eventually opened the 3 affiliates that we have today. As most of you know, I am also a Doctor of physical therapy and have been practicing for 25 years. In the time between my early 20’s and 40, I mostly utilized traditional strength training and body building methods of training, and did just about anything I wanted to do.

Ten years ago I was on a hunting trip with my father when I was climbing out of a creek bottom and noticed left hip and back pain. I just shrugged it off and thought I had strained my hip flexor, etc…But then in the course of the next 2-3 months I began to have left hip and leg pain. It progressively got worse until I saw a neurosurgeon friend of mine, had an MRI and was diagnosed with a large L2-L3 disc herniation on the left. I self treated it until CrossFit came along. At that time, the pain had subsided and I was not limited by it. I did have a sense of low back weakness when I first started CrossFit, but quickly after starting my back strength began to improve and I no longer had problems.

Then in October of 2012, I was performing a deadlift ladder and at the end of the ladder did multiple reps for more points and felt a slight pull in my right low back. Approximately 2-3 weeks later I began to notice pain in the right upper hip, low back region. It progressively got worse, even though I continued to train. I didn’t sense that it was a major injury at the time. I self treated (mistake), continued to crossFit and compete in local competitions. By the following Jan 2014, the pain had worsened and I was having difficulty with basic mobility in the mornings and performing at maximum capacity during WOD’s. I saw a physician friend of mine Dr. Herrera MD, who performed an epidural injection in Jan. I then modified my training and tried to recover for the Open. I competed in the Open and afterwards the pain continued to worsen. Throughout the course of 2014 I had 5 total epidurals, 1 of which was a diagnostic injection. By December of 2014, I could barely get out of bed due to severe right leg pain. After consulting three surgeons, I decided to have a L4-5 Discectomy. On 12/19/2014, I underwent surgery on a Friday. I rested over the weekend and that following Monday returned to my practice. Unfortunately, that Monday at work my leg pain worsened again and by the end of the day I had a foot drop and could barely weight bear on the leg. I contacted the surgeon, we did another MRI with contrast on Friday and he stated that I had re-herniated the disc which occurs in about 5-7% of the population. (great) I had not done anything to cause the re-herniation, it just happened. So, on 12/29/2014 I underwent the exact same procedure.

Fast forward to today, I still have right leg pain from the nerve damage and possible foraminal compression. I am training but modifying it to accommodate my symptoms. I am also taking medication to alleviate the nerve pain. (no narcotics, an anti-convulsive medication to improve nerve pain) I am consulting with a neurosurgeon who may perform another procedure if my symptoms don’t resolve to a level that I can function and improve my health and fitness.

The moral of this story is, don’t hurt your back in CrossFit or any other endeavor. Eight out ten people (80%) will experience low back pain (LBP), which can be correlated with injury or pathology, within their lifetime. Treating back pain is a 90 billion dollar industry and 26 billion of that is attributable to the treatment of the low back. 80% of the cost is associated with 20% of the population who eventually become disabled due to LBP.

A common misconception often cited is that 90% of back pain will go away on its own without treatment. However, a review published in the European Spine Journal in 2003, showed that the reported proportion of patients who still experienced pain after 12 months was 62% (range, 42-75%), dispelling the popular notion that up to 90% of low back pain episodes resolve spontaneously within 1 month. You can’t always foam roll it out, stretch it or treat it with modified training to resolve the LBP. Plain and simple, some injuries when sustained damage tissue beyond repair and the lumbar spine is not an area to mess around with.

Let me make a statement, crossFit is not bad for your back. Doing crossFit or any other physical training model without proper midline stabilization hurts your back. Whether it be body building, running, weightlifting, powerlifting or any other training method, back injuries occur not because of the training model but the lack of care in protecting the back. Also, life can hurt your back. Work related material handling, lifting at home or recreational activities can also cause back injuries. If you have followed the media lately, you see that crossFit is being blamed for high injury rates and reported unsafe. I find that interesting, considering the injury rate of crossFit is no higher than that of weightlifting and lower than many team and individual sports such as football, gymnastics and soccer.

3 Ways You Can Trash Your Back

1.  Performing REPEATED sub-failure loads in a back flexed position without midline stabilization (rowing, repetitive olympic lifts, deadlifts in a WOD, KB swings with a flexed low back, etc…)

2. Performing a SUSTAINED load or stress for a long duration (cyclist in a flexed low back posture, rowing with poor posture and limited hip movement, etc…)

3. Performing an EXCESSIVE large load for reps or one single lift at or above the failure level or tolerance of the tissue in the low back. (heavy deadlift max at the end of a WOD, ladder, max stone lift in a flexed back posture, etc…) 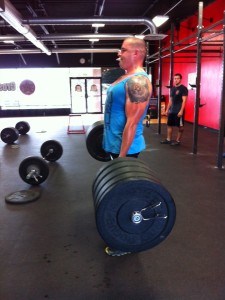 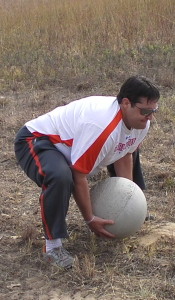 Not everything you’re taught in a crossFit box is good for your health. This is also true in any other gym in America. But, the quality of coaching and your own personal responsibility are crucial to your long term back health. Developing a strong foundation of lifting mechanics early in your training life, and not being willing to compromise technique for loads or reps, will limit your exposure to potential injury. What are you willing to sacrifice for that WOD or that last lift? For each athlete, the answer to that question is different. If you’re a Games athlete, you will be pushed beyond the failure of your tissue and body frequently, both in training and competition. But, you’ve agreed to take the risk to have the reward. If you are a recreational crossFitter and participate in local competitions and box WOD’s, your willingness to push to that repetitive or failure load limit might be less. Unfortunately, what I see in most boxes I’ve visited, is an environment of coaching complacency and commitment to excellence in lifting mechanics and athlete discipline.

When crossFit movements are performed without midline stabilization and an active back in extension, it is a recipe for a trashed back! Just because you see it in the Games or some other venue, doesn’t mean it’s good for your health. Develop a sense of discernment and educate yourself as to what postures for your spine are harmful. Here’s an example. I love the strongman stone lifts, but they are terrible for your back when performed with a flexed or rounded low back posture. Now, how many times have you seen that? Also, how about high rep olympic lifts such as a snatch where athletes use a near straight legged posture and just hinge at the back and hips. Again, a recipe for spine health disaster. I know that this is common practice in competitions, but it doesn’t make it good for your back. If this kind of lifting is occurring in your box during regular WOD’s, run to the next affiliate to find a coach who won’t let that happen! Even though rowing can be a great source of cardio and conditioning, it can also be a source of repetitive low load reps that can lead to tissue failure when performed with a flexed back and rounded shoulders. So, work on that upright extended posture very similar to that of the power clean movement.

Next blog, How To Avoid Trashing Your Back – Building an Iron Back!