Maintaining fitness through trial or injury…. 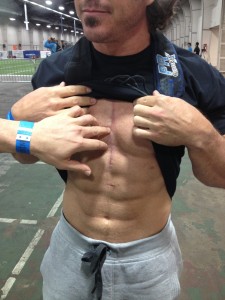 After treating patients for almost 25 years and seeing just about every response to an injury, I have come to the realization that desire, mental attitude and self-awareness play a huge role in the rehabilitative process. In general, those who want to get better, do.

Recently I was at the NPFL and I ran across D.J. Forsyth, a solid 40-44 age group competitor and accomplished athlete. D.J. mentioned to me that he had just had surgery several months before. I inquired as to the surgery, and he replied, “open heart on December 12th.” I was like, “no way.” Then he lifted his shirt and showed me the zipper. Remember that he was at the NPFL Combine showing what he could do for team coaches and owners. I then watched him smash just about everything he attempted.

What a great example of continuing to push forward in the midst of an injury or trial. So many of us when calamity comes our way, we begin to believe what everyone else around us tell us. D.J. didn’t. He knew what he could do and what he was made of. He knew that he had faced some grueling WOD’s and situations in the past and for lack of better terms, “this to shall pass.”

He had open-heart surgery for an aortic stenosis (aortic valve defect) on a Thursday and was at home watching Monday night football the next week. He credits his lifelong pursuit of fitness, a clean diet, positive attitude and healthy lifestyle for his quick recovery.

He initiated his rehabilitation program by just getting out of bed and walking and then progressing to air squats. He was only able to do 5 unbroken air squats when he started, and at the time of writing this blog, he just benched 350#. He gradually built up his endurance and strength to a level where 4 months later he competed in the NPFL Combine. 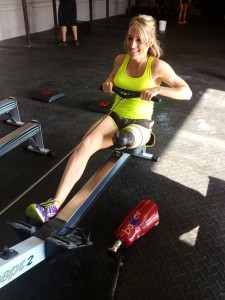 Then you have Jennifer, who was a transfemoral amputee who was referred to me for rehabilitation and the development of walking and running skills. Jennifer had a desmoid knee tumor during a pregnancy and the result of the knee tumor was that they had to take her leg. Jennifer had been a recreational athlete prior to her surgery but had never been competitive. She would run a 5k every now and then but that was it. After her amputation, she decided to start doing triathlons. So, guess what, she did! Not only did she start doing triathlons, but she eventually went to New Zealand for the ITU Paratriathlete World Championship. 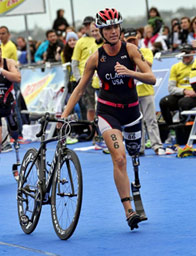 There’s a common thread of success with individuals who overcome injuries or medical problems and get back to some level of fitness. They have an overwhelming desire to overcome. I believe that it all starts with a positive mindset and expectation of not accepting anything less than the best. No matter what the situation, it could be worse. How do I know this? In the last 10 years I have worked through shoulder injury, dislocation and fracture, shoulder surgery and at times debilitating low back pain. I’ve also treated and trained hundreds of people who have had severe injuries and learned to adapt.

The key is desire! The desire to want to move forward and not allow your situation to control who you are and what you do, and a positive mental attitude, self-awareness and a will to keep going. A lot of the master’s athletes that I have spoken or worked with have some level of limitation. In my experience it is not the exception but the norm.

Stop seeing yourself as limited and start asking yourself, “how can I do this different and how can I maintain my fitness.” Follow these steps in the midst of your injury or situation.

Keep on keeping on folks!